Was the Winnipeg General Strike a Revolutionary Conspiracy? 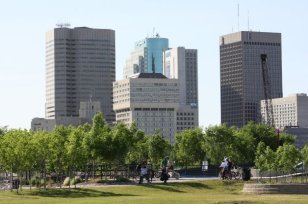 The Winnipeg General Strike of 1919 was not an attempt to overthrow the government. If one were to ask however if a group of people were conspiring with each other in order to push for a fundamentally new way to organize labour? Was the labour movement determined to form one big union that would tear down the protective walls of capitalism and force business owners to improve relations with those who worked for them? Was the intent of the movement to cause such a disruption to the economy that the government would be forced to listen or perhaps even concede to the demands of the movement? It certainly was, but it failed, initially. The failures however provided the lessons required and the motivation among the population to find other ways of achieving their goals.

Many factors led to the outburst of dissent that crippled the workplaces of Winnipeg. The proceeding era was one through which abysmal working conditions caused illness and at times even death. Wages were not regulated and due to high levels of unemployment the employers were able to take advantage of the market conditions by providing jobs to those who were willing to work for less. Monetary policy had not evolved yet to the point where inflation was controlled which caused a massive influx in the cost of goods throughout the economy. It was a perfect storm of unfavourable conditions that fed the contempt felt by those who started to wonder why it was they were not accumulating wealth like those who were in power. Then, with the success of the Russian Revolution some groups of socialists or left leaning working-class people found themselves inspired by the level of change that Vladimir Lenin had accomplished. For the first time in a very long time, people believed that change was possible. The labour movement organized in to what was known as “One Big Union” and when employers refused to negotiate with the metal and building trades it became the catalyst that launched the crusade for the recognition of the union and worker’s rights to collectively bargain through which higher wages were being insisted upon.

As Winnipeg’s economic mosaic of workers began assembling on mass and in support of each other it soon caught the attention of those in power. Rather than motivating the Government to negotiate, it instead came to the aid of business owners, in order to ensure an already fragile economy was not damaged further through a prolonged demonstration of this magnitude. The level of support throughout the city for the working-class people is portrayed well through the Canadian Museum of History:

“On May 13, the WTLC announced the results: over 11,000 in favour of striking and fewer than 600 opposed. The overwhelming vote for strike action surprised even the most optimistic labour leaders. They expected solid support from railway, foundry, and factory workers, but were greatly surprised by the equally strong support coming from other unions. For example, city police voted 149 to 11 for strike action, fire-fighters 149 to 6, water works employees 44 to 9, postal workers 250 to 19, cooks and waiters 278 to 0, and tailors 155 to 13. With this overwhelming endorsement in hand, the WTLC declared a general strike to begin on May 15, at 11:00 a.m.”

The response from business owners and the government was profound due to concerns that this may be construed as an uprising. In fact, the federal government thought it wise to send some cabinet ministers to assist in controlling the situation and some measures were taken in parliament to broaden the definition of sedition within the Criminal Code and modify legislation that could result in the deportation of immigrants who involve themselves in such unruly behaviour. The climax of the conflict occurred on June 21, 1919 which came to be known as “Bloody Saturday”. The North West Mounted Police (NWMP) were called in to disband those who continued to march through the city in demonstrations. Business owners had also financed “special police” armed with baseball bats and wagon spokes to beat those who were protesting. The federal government, worried over the level of violence that was escalating in the streets of Winnipeg also sent in Canadian soldiers to patrol the streets and roam through the city in vehicles with machine guns mounted on them. Eventually the movement was beaten into submission, the leaders arrested and federal workers were forced back to work through the fear of losing their job. Some workers were provided with an option to return, others were not, and the moral within the labour movement dissipated along with its desire to attempt a forceful negotiation again.

Instead, a new tactic, a political tactic was devised through which change would transpire over time by way of the ballot box where considerable numbers seats and votes were won in favour of the various provincial labour parties. Over time these labour parties have evolved and have changed names. Today we would recognize one such evolution as the New Democratic Party or NDP. Through their persistence in the political arena society has seen the evolution of social services and protective laws that provide and protect the rights of the working class at the expense of others. It is some of these socialist ideas however that have come to define Canada and part of the culture that we have constructed within, as an example, universal healthcare. And while it did take nearly three decades to achieve the goal of union recognition and collective bargaining, eventually it too was done through political and legal means.

It has been debated for years if the Winnipeg General Strike was a revolutionary conspiracy and depending on how one choses to define these terms the debate will likely continue for years. It was however investigated by The Royal Commission which “concluded that the strike was not a criminal conspiracy” and so it will remain simply one of the greatest conflicts to erupt on the streets of Winnipeg to date.

2 Responses to Was the Winnipeg General Strike a Revolutionary Conspiracy?